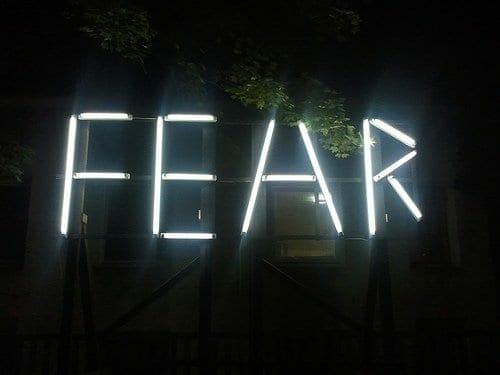 Just because I write, work and coach around confidence doesn’t mean that I’m immune to fear, and it’s funny that some people expect that to be the case.

So this is me coming clean.

This is me showing you how fear shows up in my life, as well as some thoughts on how I’m responding to it.

When I get scared of looking dumb in front of people

Some twenty years ago I signed up for an audition of a local production of Death of a Salesman. I went to the theatre, put my name on the list of auditionees, then left the building, drove away, pulled over at the side of the road and wondered why I was too chicken to follow through with it.

I still regret not actually doing that audition, but I get why I chickened out. I hadn’t been on stage or acted since school, and as I stood in that lobby surrounded by everyone else who was auditioning, shit suddenly got real. I thought everyone else might actually be able to act rather than just turning up and winging it like I was, and that I’d just end up looking like a dumb-ass in front of everyone and wasting everybody’s time.

More recently, I was in a wine-bar chatting with people about Karaoke. I mentioned that my favourite Karaoke tune was “Beyond the Sea” (seriously, so much fun) and the woman I was chatting with scrunched her face, said that she didn’t know it, and asked me how it went. The moment demanded that I start singing, but I made an excuse and said that I could only do it with the music, even though I know it by heart.

I was taken off guard by someone asking me to risk looking silly,
and chickened out

What happened in both of these situations was that I internalised the situation I was in, then concluded that if I went ahead I’d be laughed out of the room.

That’s like thinking that if you go to the store and buy eggs, you might end up with actual egg on your face, so it’s probably best not to buy eggs and just have toast instead, because you can totally deal with having toast on your face.

When this shows up…
Every time this happens now, I practice interrupting the thought I’m going to look dumb with Sounds like fun.

For me, that works a whole heap better.

8 years with an incurable, debilitating, chronic illness and counting.

Sometimes, it rears up and smacks me down so hard I wonder if I’ll ever get back up.

And sometimes, the fear of how the illness will pay me back makes me cower and say no to something, simply so I don’t have to deal with a flare-up that could floor me.

I’ve said no to a heap of stuff—parties, days out, family celebrations and loads more—just because I’m terrified of how the illness might react.

When this shows up…
I’ve become pretty good at noticing this one now, and when it happens I think about nourishment. If doing the thing that might cause a flare-up will nourish my head (a learning opportunity, a conversation with someone interesting, etc), heart (e.g. a little time laughing with friends or adding value to something that matters) or body (like a long walk) I’ll tend to say yes to it.

The only exception to that is when there’s a larger piece of nourishment looming that I know I need to preserve my energy for, and even then I’ll try not to get sidetracked into detailed analysis of risk/reward, but just look for how I can keep myself nourished.

Moreover, I always remember that however my body is doesn’t need to dictate my experience.

When I’m around people and having fun I’m in my element. I love the energy and the buzz of bouncing off others, but sometimes, in the quiet moments when things are done and it’s just me again, I wonder what they really think of me and what they say among themselves.

Holy fuck I’m glad he’s gone. What an asshat.
Did you hear the stuff coming out of his mouth? Who the hell does he think he is?
It’s okay, he’s gone. Now we can have fun.

Occasionally there’s fear that people might have thoughts about me that are less than favourable, thoughts they keep secret or worse, thoughts that are discussed openly when I’m not in the room.

I can’t look into people’s heads and see what’s going on inside, and so this thought is really just a projection of my “self” into others’ thoughts (as if they don’t already have enough to think about), albeit one that pre-empts rejection so that maybe, just maybe, it won’t hurt as much when I get rejected.

When this shows up…
I know you’ll have thought similar thoughts, but that’s all they are. Thoughts.

But it doesn’t stop those thoughts from being compelling enough to want to make people like me.

So, when this shows up I do 3 things.

And that seems to help a whole heap.

When someone wants to get close to me

When someone wants to get close to me, I don’t know how to react.

Believe it or not, I’m ill-practised at it and clumsy in response to it, and all my charm, smarts and wit pretty much just hides a scared little guy who’s afraid of emotional intimacy.

The times I’ve opened up and let someone in, I’ve been hurt

And when someone’s wanted me to open up and let them in, I’ve pushed them away.

I laugh it off as coming with the territory of being a middle-aged, awkward English guy, but that’s not owning up to my fear around this.

That fear is all too real, and if fear could be weighed, this one would come in at around 17 metric fuck-tonnes.

When this shows up…
Managing any fear starts with noticing it, and it’s the noticing that affords you the opportunity to interrupt your normal reaction.

So for me, this one is taking the most practice of all.

I’m approaching it in a couple of different ways.

I had an amazing first date with someone just recently, then got rejected right after I said that I was interested, so perhaps it wasn’t as great as I thought. Funny thing is, I was cool with that and still loved the evening.

After a friend had a massive emotional trauma, I let myself just sit and hold her hand without trying to fix anything, and shed a tear when I told her I loved her.

Following a funeral in the family, I started a conversation around our wishes for our own funerals, the kind of charged conversation us Errey’s would normally avoid.

And I went on a national TV dating show that films blind dinner dates. And I loved it.

I’m just beginning to get it, I think.

When I look ahead at retirement

I’m not wealthy, and I have around 20 years or so to get my retirement sorted so that I’m not living off cans of spam in a tiny, damp studio apartment in the wrong part of town.

I love the finer things, I love laughing with good people and my history with money is less than stellar, so the fear that I might have a cold, lonely retirement chills me to the bone.

And then I pile on the pressure to succeed, and succeed fucking quickly, while also beating myself up for not being better with money and not being grown-up enough to have this sorted.

I’m a crappy adult, I tell myself.

When this shows up…
This is a tough one, because I have no way of knowing what’s going to happen 20 years from now.

And it’s the unknown nature of the future that gives this fear its power.

So when this one shows up, I remind myself that the future isn’t set. Through my choices I get to have a say in what happens. And while the responsibility of having a financially viable retirement is, at first glance, scary as all hell to me, it’s really about taking baby steps. Making the best choice I can, with what I’ve got. Then doing that over and over again.

And maybe that’s the key to responding to all kinds of fear.

Trusting that you’re already good enough to take your next step, right in the middle of fear.

That sense of confidence, without even knowing what’s going to happen, is worth the whole world.

Can you relate? How does fear show up for you?