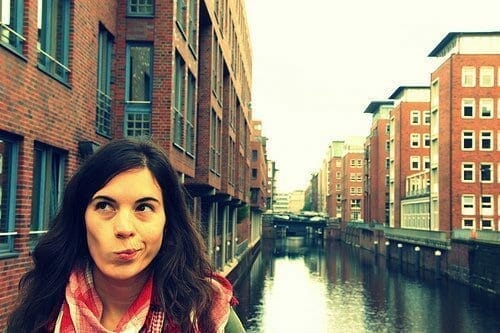 Every project I take on, I wonder if this is the one that I crawl away from with egg on my face. Every article I write, I wonder “What if I have nothing to say?“. Every date I go on, I wonder whether this will be the one where they laugh me out of the room.

It’s not just me either. Whether you’re a circus performer, a Wall Street banker, a sushi chef, a submarine captain or a librarian, self-doubt will be a regular visitor.

Self-doubt is that horrible, gut-plummeting question of
whether you’re good enough

It’s a yawning, gaping lack of confidence in yourself and your ability that makes you feel small and alone like a scared penguin in a haunted tunnel.

So to hell with that. Let’s do something about it, shall we?

You’ve had doubts before, right? Whether those doubts were about studying, relationships, new jobs or anything else, you’ve been there before.

And yet you’re here, now. You’ve come a long way. The evidence supports that you’ve survived this life thing so far, even with all those times you’ve doubted yourself. And as the best predictor of future behaviour is past behaviour, it’s odds on that you’ll continue to survive, no matter how big the self-doubt.

The self-doubt wants you to feel small and it might even want you to panic a little. But as the facts support, you’re bigger than it will ever be.

Doubt can be bloody confusing. It spins around and makes you wonder which way’s up, where North is and whether you can trust the ground you’re standing on.

But sometimes, it’s there to help prepare you.

You don’t have to pander to it or do what it tells you, but what if the voice of doubt was there to help you?

Doubt can be more of a downer than a greasy weasel down a luge run, but taking something positive, helpful and enabling from it can be a surprising and wonderful twist.

Doubt rears it’s head when there’s change, risk and possibility in the air, because it hates that stuff. So an effective strategy is one that reduces the threat level down to something that’s eminently manageable or doable.

TV’s Sheldon Copper would approach a challenge by breaking it down and running an experiment to see what happens. Then he’d learn from that experiment and conduct another one. Then he’d probably freak out that he was wearing his Tuesday socks on a Wednesday and secure himself in his room because the world no longer makes sense.

Maybe that’s not the best example I could have found, but the take-away here is that there’s something to be said about approaching things a little more scientifically.

Running small experiments is a fantastic way for you try something and see what happens. You get to change a variable and learn from what happens, without the sense that you’re irrevocably committed.

Reduce the perceived risks by running small experiments, and you simultaneously reduce self-doubt.

4. Swap to a better narrative

That voice of doubt is a cracking storyteller.

It’ll spin a yarn about how bad things could get and how horrible you’ll feel. It’ll regale you with tales of people better than you who’ve tried and failed. And it’ll tell you stories as you fall asleep of how you can live happily ever after if you just don’t do anything stupid.

None of us know what’s going to happen.

Choose a better narrative, one that sees you as whole and resourceful or one that sees doubt simply as a sign that you’re alive and well and striving, and see how that changes things.

Trees have roots. Shoes have soles. Pies have pastry.

There will be times when the voice of doubt is so shouty and controlling that you need some external input to help you through. Your supporters—the people who want the best for you even when you don’t—are there to do just that.

This isn’t about throwing yourself a pity party or boosting your ego, it’s about asking for help and support so you can take your next step rather than sink into the mud.

So take a look around you. Your supporters might include old friends or new friends, a partner or a family member, a colleague, a coach, a priest or even a pet (yes, really).

When that voice of doubt has its teeth into you and you need support to feel strengthened, it’s time to call in your supporters.

How do you deal with self-doubt?