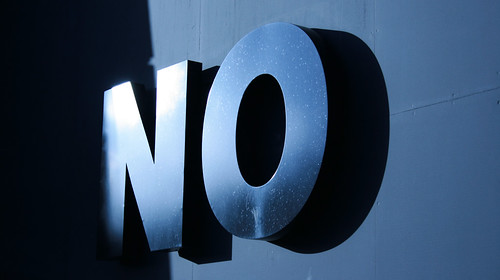 Can you just do me a quick favour?

I need you to drop what you’re doing, run down to the end of the road, flag down a car, take a ride to the mall and get hold of some floral print wallpaper, a pair of chinos and a Lego Princess Castle. Can I get that stuff in the next hour, cool?

What do you mean, no?

Saying “No” is one of those things that make us feel horrible. Like we’re doing wrong by someone. That we’re letting someone down. Or that it makes us an asshole for not saying Yes, because helping people out or grabbing opportunities is what we’re lead to believe is the “right” thing to do.

Your confidence can vanish in the face of a conflict or a difference of opinion, so here’s how to say no without being an asshole.

1. Know that it’s your right

The meme that grabbing life with both hands means saying Yes to everything you can is wrong like penguin pie and panda pudding at a Greenpeace picnic.

Saying No is your right. And it’s a right you can employ when:

It’s easy to see the act of saying no as something that’s inherently conflictive, that it sets up a situation where one of you is right and one of you is wrong. And sure, sometimes it might lead to a difference of opinion or even a polarization.

But it doesn’t need to be a drama or a screaming catfight. It can be “I’m really sorry, I can’t this time” rather than “No, fuck the fuck off“.

Look at what’s in your head around creating or avoiding conflict (after all, unless you’re Blofeld or Trump nobody really likes entering into conflict) and see how you might be conflating that with saying no.

Replace the thought that wants you to avoid conflict with one that says, “It’s okay if I say no to this”, and remove the drama from the act of saying no by recognising that you’re not rejecting the person asking, but simply saying no to what they’re asking of you in that moment, and for good reason.

I’ve said no in my work, in friendships, in relationships and in the bedroom. And through the act of saying no I’ve learned how easy it is to mess it up.

Sometimes you avoid saying no because you don’t want to hurt, offend or wound, right? But you don’t have to make it personal and you can say no with compassion and empathy.

Compassion and empathy don’t require that you understand the reasons why they’re asking, only that you appreciate that they’re doing their best with what they’ve got.

So what if you took it as a compliment that you’re being asked? What if you could express gratitude for the fact that they reached out and asked you for something? What if there was another way—perhaps even a better way—you could help or add value?

Come from a place of love, compassion or empathy and you never have to hurt, offend or wound.

If you employ these strategies and the result is a jumbled forest of grey trees with a good point lost somewhere inside, then you’re doing both of you a disservice.

You can stand firm and be clear where you need to be, and indeed, often that’s exactly what’s called for.

Think, “Sorry, I can’t do that” rather than “Well, maybe when I have a bit more time or when the days get longer or when there’s a full moon or when my cat learns the merengue.”

Saying no doesn’t make you an asshole. It makes you a person who trusts they can make a good decision.

It makes you confident.