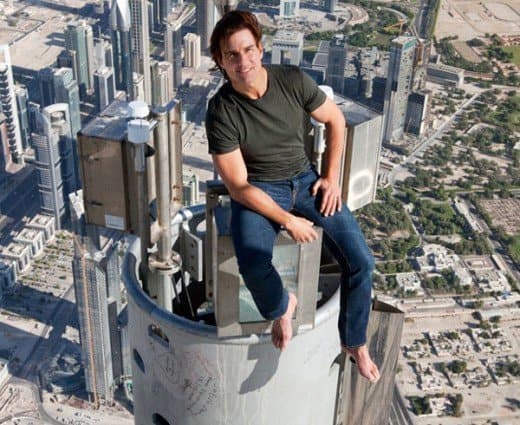 One morning before the days shooting began for Mission Impossible 4, Tom Cruise took a crew up to the top of the Burj Khalifa in Dubai via helicopter, then climbed out and sat on top of it.

No safety ropes. No net. Not even any shoes.

The Burj is, of course, the tallest building in the world. For context, here’s what he was sitting on the very top of:

When asked if he was afraid up there, Tom answered with a simple “No”. He wasn’t afraid, he just wanted to do it.

So it might seem appropriate to draw the conclusion that super-confident Tom can do anything, because he appears to be fearless. A fair conclusion perhaps, and one we’ll come back to.

For the rest of us, sitting on top of the Burj—even with a rope harness—would scare the living bejeesus out of us. I know for sure that I’d need to take a spare pair of shorts with me.

Fear of falling to your death is quite reasonable when you’re sitting a kilometer in the air without anything to stop you becoming pavement pâté other than your bare hands, but what about everyday fears, like screwing up or finding out you’re not up to the challenge in a new job?

First things first. Fear is a hard-wired mechanism your brain uses to keep you alive. It told our ancestors not to play with the big cuddly bear with huge claws because death might ensue. It told us not to go to the bad part of town in the middle of night because bad things might happen. And it tells us not to take unnecessary risks because we might end up on the losing side.

This is one way that confidence gets eroded, by hearing and acting on your fears, whether real or imagined.

Once again, it seems like the logical conclusion here is that confident people are less afraid, possessing the ability to beat down the fear, keep their emotions in check and take action.

Here’s where I sound the debunking alert (cover your ears).

Everybody experiences fear. You, me, Tom Cruise and every tiny nun in the world.

Real, natural confidence is knowing that you’re whole, no matter what your experience is in any one moment.

Those things are like passing weather – coming and going, sweeping through, sometimes changing the light or the landscape for a moment. These weather systems happen all the time, regardless of whether you want them or not (believe me on this, I live in England).

People frequently respond to fear by trying to push it way, bury it or run from it, but try doing that with a passing cloud and you’ll wind up equal parts exhausted and unsuccessful.

The belief that fear is undesirable, unwanted and unhelpful is the problem here, not the fear itself.

Naturally confident people don’t judge fear, try to force it to be a certain way or have their world shaped by it. They just see it as a thing that happens.

Fear is always there in some form or another, and it only becomes a problem, a blocker or a drama if that’s the narrative you weave around it.

Sometimes, like Mr Cruise sitting on top of the Burj, an experience of “fear” can be transformed by welcoming the entirety of the moment rather than a narrow definition of what fear might mean.