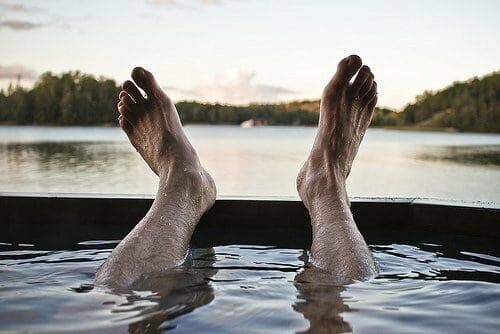 “Oh, the good life, full of fun
Seems to be the ideal”

Cracking out Tony Bennett’s The Good Life at the top of my lungs in the shower while pretending I could show Michael Buble a thing or two is bloody awesome fun.

You know the song?

It starts off with a bang, a feel good opening that always makes me smile. But I went a few years without really hearing the lyrics, which basically just descends into a heart-broken rant of loneliness and empty hope for a better life.

Either you’re the first human to live without a fear that they don’t deserve a good life, have somehow cracked the meaning of life and are quite possibly the next step of human evolution, or you’re a big fat liar who’s terrified of admitting the truth. So you might want to read on too.

Brene Brown tells the story of how she returned home from a wonderful date night with her husband, feeling truly blessed. Walking up the path to the front door of the family home she loved deeply, she turned to her husband and said, “What if there were bad guys with guns hiding behind the bushes here? We’d be shot to pieces before we ever got to the front door.“


Another story she tells is of a late-forties mother who told how she used to take every good thing in her life and imagine the worst possible disaster, simply so she could try to control all of the outcomes and variables. The woman said, “Unfortunately, I’ve passed that way of thinking down to my daughter. She’s increasingly afraid to try new things, especially when her life is going well. She says she doesn’t want to ‘tempt fate.'”

And then there’s the story of the man in his early sixties, who explained that he’d gone through his life believing that if you go through life expecting the worst then you’ll be prepared for it when it happens, and pleasantly surprised if it doesn’t. When his wife was killed in a car accident, he found that he wasn’t prepared at all. “And worse,” he said, “I still grieve for all of those wonderful moments we shared and that I didn’t fully enjoy.”

What if he thinks I’m a terrorist?

While sitting on flights at the start of fantastic trips, I’ve sat in my seat and thought “What if the floor of the plane just fell out now?””

I’ve driven over the Golden Gate Bridge and wondered, “Shit, if an earthquake struck suddenly this whole thing would collapse and I’d end up in the drink trapped inside a crappy rental.”

On seeing an armed police officer on the streets of London, I’ve thought, “Holy shit. Don’t make eye contact. What if he thinks I’m a terrorist and shoots me?”

I know you do this too. You conjure up scenarios of everything that could tear your life apart, simply because it’s feels safer than opening up and saying “thank you” for the imperfect moment you find yourself in.

This “beating vulnerability to the punch” is wired into us as human beings as a way to keep us safe. There are other mechanisms too.

There’s the voice that tells you that “you’ll only fuck this up eventually“. The one that tries to persuade you not to bother trying because “I don’t want people to see me screw this up“. And, of course, there’s our old friend who says, “Even if you did want this (which I doubt), you’re not good enough to get it“.

Your capacity to turn away from joy needs to be softly, consistently counseled

These fears, doubts and second-guessings are mechanisms that can’t simply be erased. You can’t push them away, ignore them or outrun them.

Doing so only creates more fear, doubt and second-guessing.

The answer, I think, lies in acknowledging them with gentle, non-judgmental eyes, and moving with them towards what matters to you.

You have untold capacities and unfathomed depths, and
you’re plenty good enough to live a good life

It sounds trite like a rerun of The View to say that you already deserve a good life. But you do.

I know you know it, so let me ask you this.

What if you could nurture something ten thousand feet down inside you that made it okay to be vulnerable, and what if that same quality helped you lean towards the good?

What could that mean for you?