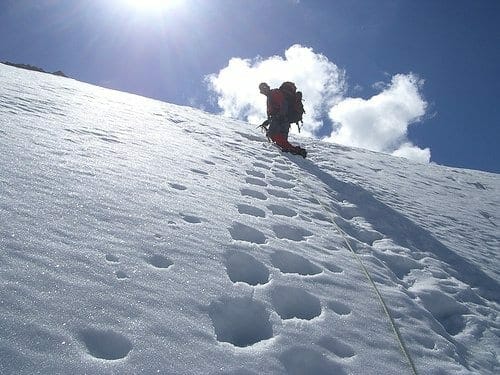 That’s the thing with doing the thing you never thought you could do.

You think you could never do it, until you do.

I’m willing to bet you’ve done things you never thought you could do. And I’ll put money on the fact that there’s something right now that you think you could never do.

So if the evidence supports anything, it’s that you can do it. And who knows, you just might.

Of course, it’s easier said than done, and there are a 3 walls you might have to push through on your way. I call them the 3 walls of doing the thing you never thought you could do. Yeah, I should work on a catchier name, but in the meantime, here they are.

I’m not known for my sporting prowess or extreme fitness challenges. I’ve never been into that stuff, and always shudder a little when someone says I should try bunjee-jumping, kayaking or sky-diving. That stuff isn’t who I am.

Or rather, they haven’t been. As demonstrated by my fund-raising marathon, I do have a body and I can do stuff with it. The belief of that’s not who I am, could have been enough to stop me, simply because the action didn’t align with my beliefs about my identity.

Don’t be precious about your identity. Your identity isn’t you, it’s just a set of thoughts about who you are, what you do and how you deal with life. If you’re confronted with the wall of identity, just say, “Oh hey identity. I know you want to keep me safe, but remember, you don’t define me, I define you.”

Identity is one thing, but you also have a heap of stuff in your head about your capability. These are the thoughts that tell you can’t do it, you’re not ready or you’ll screw it up.

And to be brutally frank, some or all of those things might be true. We just don’t know yet.

But should you let your beliefs (which are just sticky thoughts) dictate what you give your energy to or what you give your best to? I’d suggest that if something matters to you—if it rings true, resonates or sounds like fun—that thoughts about your capability are somewhat irrelevant.

You’re not born being able to do everything. You have to learn stuff. Whatever your thing is, you can learn, practice and try it out. You can test and learn as you go. You can develop strategies for getting better. You can pivot and refocus your energy.

Your capability is never fixed unless you think it is.

So that’s identity and capability looked at, and you might think that’s enough. But the final wall is perhaps the most pernicious and complex—the wall of worth.

This wall is built from thoughts like “I’m not good enough“, “I don’t deserve it” and “other people are so much better than me”.

Holding those thoughts fuels a belief that you’re somehow insufficient and drives behaviour that keeps you small; neither of which are helpful to doing the thing you never thought you could do.

What’s key in pushing through the wall of worth is acknowledging the fact that you’re not broken. You are already a complete human being. There’s no “thing” that others have and you lack. You’re already worthy of the best in life.

You don’t need the thought “I’m not good enough” any more than you need a friend who says that to you every day. That wouldn’t be a friend at all, it would be someone who wants to keep you small and control you.

So take a breath, feel how whole you are and how pregnant you are with possibility.

After you’ve pushed through those walls, you’re all set.

You’re on your way

And magically, your confidence will have grown the next time you want to do something you never thought you could do.