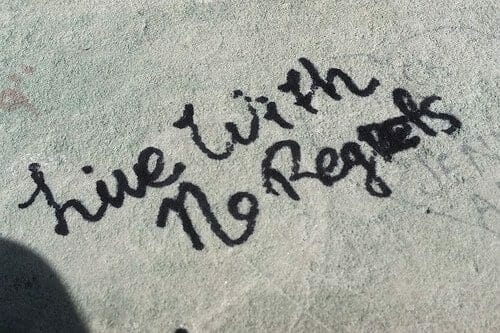 Regrets. I’ve had a few.

But then again, maybe I’ve just kinda teetered at the edge.

There are a few decisions I’ve made that I might not make again if I had another run at them; things that would be all too easy to regret.

It’s complex, full of emotion, confusion and blind alleys. It can swallow you if you wallow in it too long. It can deceive you if you follow it blindly. It can drain the colour out of your life if you let it.

Regret is one of life’s most potent pollutants.

I’ve seen it weigh heavy on people and get in the way of creating and sustaining meaningful change, but I wasn’t sure what was really going on behind the scenes, how it sucked people in and what could be done about it.

So like a dead frog in biology class, I opened it up to see what made it tick.  I found 5 types of regret, each of which can be transformed into an extraordinary opportunity…

Regret for the things you’ve done

“…We don’t have to be defined by the things we did or didn’t do in our past. Some people allow themselves to be controlled by regret. Maybe it’s a regret, maybe it’s not. It’s merely something that happened. Get over it.”
― Pittacus Lore, I Am Number Four

You now have a choice to make. Either you get over it and keep on going, or you keep comparing what happened to the picture you’d created in your head of how things would go.

And so you stare into the gap between what happened and the picture you had, still wishing that it had gone differently.

It’s entirely pointless, of course. What’s done is done. You know this, so why is it so damn hard to break away?

Once a compelling picture of a specific outcome is in your head, it’s hard to get rid of it. You grow attached to the picture of how you want things to be before an outcome arises, and once it arises you keep looping back to how things should have looked.

The stickiness of the picture is what keeps regret closeby

To unstick that picture, take out and keep the elements that truly matter to you from the specifics of the outcome, environment and circumstances – stuff like how you still want to feel, how you want to look at the world and how you really want to expres yourself. Then throw away the rest.

The parts that have real meaning live beyond any specific outcome. You get to honour those things no matter what happens.

Regret for how you’ve treated someone

“It’s unfair.”
As a rule, life is unfair,” I said.
Yeah, but I think I did say some awful things.”
To Dick?”
Yeah.”
I pulled the car over to the shoulder of the road and turned off the ignition. “That’s just stupid, that kind of thinking,” I said, nailing her with my eyes. “Instead of regretting what you did, you could have treated him decently from the beginning. You could’ve tried to be fair. But you didn’t. You don’t even have the right to be sorry.”
― Haruki Murakami, Dance Dance Dance

Ever said the wrong thing to someone and wished you hadn’t? Ever made someone feel small and then felt terrible? Ever been mean to someone and later regretted it?

In the heat of the moment you might say the wrong thing out of anger, bitterness, frustration, envy or jealousy. Sometimes those emotions can drive you purposefully towards treating someone badly in order to exact some kind of revenge or in the pursuit of some kind of “fairness”. Both situations can end up hurting someone, and in my book that’s inexcusable. No exceptions.

Regret for how you’ve treated someone stems from the knowledge that you’ve done wrong by them, and there are 2 scenarios here.

1. You’ve actually hurt someone.
Regret about hurting someone is living in the detail of what happened and wishing that it hadn’t happened at all, and all the time you’re stuck in that place it won’t change anything.

The former sees you judging yourself and beating yourself up for who you are; the latter sees you being honest with yourself about what you did which gives you the chance to apologise, make amends or otherwise move on.

Here’s the strange thing about it though – being regretful about hurting someone means that you give a shit. It shows that you care about them. Rather than wallowing in regret, what’s a better way of demonstrating that?

2. You just think you’ve hurt someone.
Regret about hurting someone when you haven’t actually hurt them is a dangerous fantasy.

This can be a simple misunderstanding that can be cleared up quickly, or it might be coming from a place that posits the case that “I’m not okay“. Thinking you’ve hurt someone when you haven’t is about how you see yourself; casting yourself as the wrong-doer and the other person as the innocent.

If this is a pattern, working on the regret won’t help – there’s work to be done on your thoughts about yourself first.

Regret for the things you didn’t do

“Take the stupidest thing you’ve ever done. At least it’s done. It’s over. It’s gone. We can all learn from our mistakes and heal and move on. But it’s harder to learn or heal or move on from something that hasn’t happened; something we don’t know and is therefore indefinable; something which could very easily have been the best thing in our lives, if only we’d taken the plunge, if only we’d held our breath and stood up and done it, if only we’d said yes.”
― Danny Wallace, Yes Man

Holding back from something you want to do, talking yourself out of something that might be amazing or limiting your view of what’s possible will do one of 2 things.

Either you’ll end up regretting the things you haven’t done and the risks you didn’t take, or you’ll mold your thinking to the point where you believe you made all the right calls and where reinforcing your belief about being right becomes more important than being happy.

Both routes are shitty, giving you ample help in becoming sad, small and quietly desperate.

I’m not saying that you should do everything you think of, because that can be equally damaging. What I am saying is that you need to listen. Really listen.

To what matters. To what’s worth the risk. To what might make you come alive.

Then take a breath and act.

Regret for the things you didn’t pay attention to

“Over the last couple of years, the photos of me when I was a kid… well, they’ve started to give me a little pang or something – not unhappiness, exactly, but some kind of quiet, deep regret… I keep wanting to apologize to the little guy: “I’m sorry, I’ve let you down. I was the person who was supposed to look after you, but I blew it: I made wrong decisions at bad times, and I turned you into me.”
― Nick Hornby, High Fidelity

The years roll by. Seasons change. You change.

Regret for the things you didn’t pay attention to is waking up one morning and saying, “What the hell happened to my life?” and not even being able to think of an answer.

Just like the Grand Canyon has been eroded and shaped by the waters passing through it, over time, incremental shifts in thinking and behaviour can drastically alter the landscape of your life.

Letting time slowly erode what matters is guaranteed to stockpile regret for your later years. So gently watch what you dismiss and what you embrace. Gently watch the judgment calls you make and the resultant impact on what you believe. Gently watch how much value you’re creating.

Ever got stuck on something that’s happened in your life and had it weigh heavy on you? Regret certainly falls into that category, but so do 2 other things that can get confused with regret.

“The soft strings of the lute rippled with memories, and the maid’s lilting voice made Mary sigh as she closed her eyes. She fell asleep filled with sadness, but without regret.”
― Margaret George, Mary Queen of Scotland & The Isles: A Novel

Sadness is about loss, regret is about behaviour.

Loss is natural, it’s part of life just like breath and birth and bills. Regret is thinking that’s layered on top of your behaviour that can lead to further behaviour (like wallowing).

“When I was young, I spent my days and nights trying to impress future generations. I spent them. They’re gone. All because I was deathly afraid of being forgotten. And then came the regret. The worst things of all worst things.”
― Miguel Syjuco, Ilustrado

Brene Brown describes shame as being that feeling that washes over you and makes you feel small, less than, not good enough. Those feelings can be magnetic, drawing your attention to them time and time again and making you wish something had never happened.

But wishing you didn’t feel small or not good enough is about how you see yourself and wanting to escape from your belief that that you’re less than the sum of your parts. It’s about self-worth, belonging and a desire to be enough.

As Brene puts it – you’re already worthy of love and belonging.

Regret can’t be born or survive when you’re asking the right questions.

Ask questions about what’s fun, resonant, playful, daring, meaningful or even silly, and regret has no place to live.

And should you find yourself with the experience of regret, see it for what it is – the realisation that you didn’t listen to yourself.

Do you have any regrets?