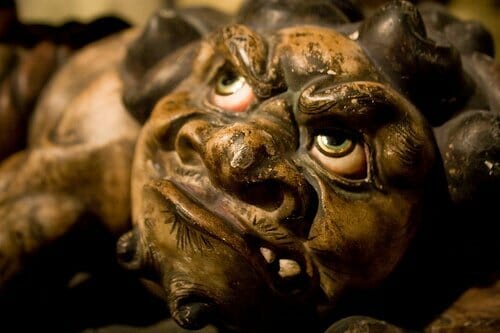 My demons have got the better of me a few times.

With two trips through depression and an unexpected stay in Breakdownville, I’ve dwelled in my dark corners and I’ve wrapped that darkness around me like a blanket.

It ain’t pretty. Think Gulag rather than Gansevoort.

We’ve all got demons, those things that are always lurking in the darkness, waiting for you to loose yourself, ready to devour you. So you tool yourself up like a real-life Buffy or Constantine; kicking some serious demon butt and fashioning a fetching necklace from their teeth.

But who in the hell wants to spend their lives battling demons; always fighting?

Not me peppy. Not me.

Vacationing in that Russian Gulag and being fed my own toes sounds like it would be more fun than spending my whole life struggling against and fighting with my demons.

So what if the popular belief that you need to fight your inner demons is just a misguided, short term strategy?

What if fighting your demons is just a bunch of hooey?

After all, they never really go away, do they?

They’ll keep coming back, like a a zombie horde or Charlie Sheen

So rather than tying a bandana round your head, slipping a machete through your belt and refilling both barrels, what if you met them somewhere neutral, opened a cheeky Bordeaux and got to know each other a little better?

Wouldn’t making friends with your demons be a better solution than looking like a Stallone wannabe at an open audition for the next Expendables movie?

The process of making friends with your demons is how you get to own every part of you, and it’s this process and the acceptance it brings that affords you the ability to move with the grace and power of someone who knows themselves fully.

It is better to conquer yourself than to win a thousand battles. Then the victory is yours. It cannot be taken from you, not by angels or by demons, heaven or hell.
– Buddha

Just 3 things to bear in mind when making friends with your demons.

In light of those 3 things, here’s what you need to do in order to make friends with them:

Got any demons you could make friends with?