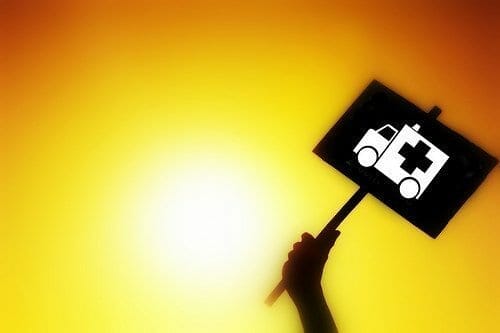 The first time I told someone that I’d been diagnosed with M.E., I choked on the words and found tears welling up in my eyes.

So I blurted it out, then hurried away to pull myself together and man up.

That was in 2009, following 2 years of being increasingly ill and having a string of doctors tell me they didn’t know what the hell was wrong.

Since then it’s been a rollercoaster.

A rollercoaster with some bloody wonderful views at the top, a load of white-knuckle twists that make you want to throw up and one where you can never be sure when a bigger plunge will be coming up.

It’s made me get my shit together in ways I’d never have guessed at, and so here, with the aim of showing you how challenge and hardship can be grown into and learned from, are 5 things I’ve learned from 8 years of chronic illness.

Other people don’t need to get it

I’ve tried explaining this CFS / M.E. thing to friends, colleagues and family before. How every morning when I wake up it feels like every bone in my body is broken. How some days it takes all my strength and concentration just to stand upright. How the brain fog makes it impossible to pull out a coherent thought for days at a time.

But it never quite works, because other people aren’t inside the experience with me.

I’ll never know what it’s like to live without legs, to be born and raised in Guatemala, or to be a Pisces. I’m not inside those experiences, so while I might be able to imagine or empathise, I’ll never truly get it.

Other people don’t need to understand what’s going on for you in order for it to be a real and valid experience.

Clinging onto the need to have someone else validate your experience is like demanding that your elderly aunt tries being less elderly and starts dressing and talking just like you or you won’t acknowledge her.

I love you Aunt Elspeth, but I’d love you more if you’d just wear my clothes, put on these glasses and start talking like a middle-aged geek with a bald patch and a penchant for inappropriate humour.

So, I’ve learned that giving people my best is more important than having them understand my worst.

My body’s batteries are fucked.

The mitochondria in my cells don’t produce enough energy to keep the lights on, and when that energy runs out everything goes black.

That gets hella frustrating when I want to do stuff like take a trip, go out with friends, start a new writing project or celebrate a family birthday, because I’m constantly trading energy between different activities.

Energy is the currency you spend on your decisions and the patterns of behaviour that follow.

It’s truly priceless, and however much of it you have, you get to choose how you spend it.

So, I guess I’ve learned that however much energy you have, it’s truly fucking wonderful.

Experience is a matter of choice

When was the last shitty day you had?

A long, crappy day at work where you feel out of control or out of your depth certainly makes you feel crappy. As does having a fight or confrontation with a friend, partner or family member that left you reeling and/or ranting. Spilling coffee down your front. Getting stuck in traffic. Hearing bad news.

A shitty day makes for a shitty experience

It’s about circumstances. Shitty circumstances get into your head and turn your thoughts into a sludge of “get me out of here”, “this sucks” and “I hate this”. And then what you’ve got is an experience that’s a whole heap shittier than the circumstances deserve.

So I’ve learned that those days when the illness is tearing chunks out of me don’t need to turn into shitty days.

I’ve learned that the way my body is doesn’t need to to dictate my experience.

Separation fucks you up

Sound the zen alert, but I’ve found that a practice of staying mindful helps enormously in managing chronic pain, and I meditate frequently in order to do just that.

I started this mindfulness practice 5 years ago, and while I know it’s been a huge help I also see how I’ve been misusing it in ways that have, at times, crushed all the air out of my heart.

Mindfulness is about acknowledging what’s happening, from your breath to the sounds around you, from the feeling of the chair under you to the air crossing your fingertips, from the thoughts rolling through your head to the sensations rolling through your body, while never judging them and never letting “self” be swept along with them.

There are times when I’ve used mindfulness as an excuse to separate myself from my experience, and found confidence in the control that came from that.

It’s like reaching out an olive branch in peace, then bashing the crap out of someone with it when they try to grab for it. No Larry, don’t grab. Bad Larry. Bad Larry.

Not only is using mindfulness to control experience a dumb-ass thing to do and really missing the point of mindfulness (which is to not need it), but it’s damaging like putting a kitten in a blender.

So I’ve learned that even though it’s messier, integration is beautiful.

I get angry sometimes.

You ever been frustrated because poor health prevented you from doing something you wanted to do? Maybe a bad cold prevented you attending that great party. Maybe a 48 hour vomiting bug stopped you seeing an old friend. Or maybe a broken leg meant that you couldn’t go on that trip after all.

So yeah, it’s frustrating as all hell to not be able to do stuff you want to do because your body won’t let you. And when your choices are limited on a daily basis, that’s a lot of frustration.

And anger sits on top of it.

So I’ve learned that anger always sits on top of pain.

And rather than choosing to reside in that anger, I’m much better served to spend a little bit of time hanging out with the pain that’s underneath.

If I had a penny for every time I’ve been tough on myself for not getting more done, I could have made a real life shrine to pennies made out of pennies, complete with a penny dome, penny landscaping, a penny giftshop and a penny vault to keep all the extra-rare pennies in.

I love to write. I love to laugh. I love to come up with new stuff for you. But when the illness forces me to rest because I can’t take another step or think another thought, I beat myself up for not being more productive.

Why haven’t I written The Code workbook yet? Why aren’t I out having fun with good people? Why haven’t I finished the novel already?

That thinking, of course, relies on believing that productivity is good and rest is bad.

Which is the biggest pile of bullshit since Billy the biggest bull in the world ate a bad clam, evacuated his bowels for 2 days straight and became Billy the horribly emaciated bull.

The illness doesn’t force me to take rest.

I’ve learned that choosing rest affords me the energy to do the things I love, and so it can never be a waste.

Story is Fucking Everything

Those 6 areas I’ve just spoken about?

They all weave together to form a story. A story I slip into now and then, as seductively as you might slip into a 5 star, 1500 thread count hotel bed after 24 hours of travelling.

I’m hard-done by. Other people have it easy. I won’t get where I want to go.

When the illness is flaring up it’s fucking horrible. It grabs me and rips me into pieces. And then I throw a pity party.

CFS is clawing chunks out of me. All I can do is stroke its hair and whisper it to sleep.

Sometimes I just let that happen because I know it’s healthy and okay to have down days. That’s cool. Other times, I stop for a moment and wonder just when I became a victim.

I’m no more a victim than I am a small horse or a bugle, but damn those stories are hard to resist aren’t they?

But they’re not true

They just tell one, narrow, horribly skewed side of the way things are or the way things can be, and the narrative you tell yourself sets the parameters for your experience.

The illness doesn’t “rip me to shreads”, it just finds new ways to challenge me. Other people don’t have it easier than me; many have it much, much worse. I may need to go a little slower, but I still love the smell of progress in the morning.

I’ve learned that the story you choose becomes the world you inhabit.