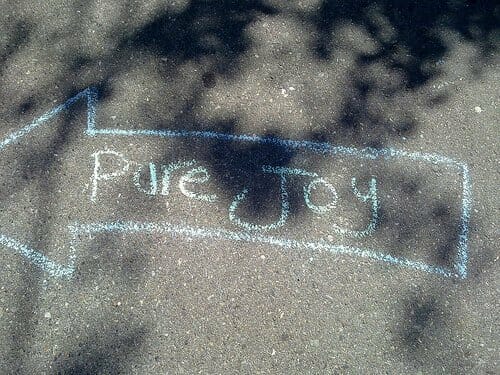 Get me talking about the latest box-set, the new Marvel movie or that new place in town with horrible service, and I’m as comfortable as an old shoe.

Talking about joy on the other hand, well, it’s just not part of the middle-aged English guy lexicon, you know? I hear the word, and my brain starts figuring out whether it’s more appropriate to wretch or sneer.

Joy just sounds so goddamn fluffy; the kind of stuff that Princess castles and kittens’ kisses are made of.

But you know something?

The joyful moments are the ones that make life burst open with colour and music, and without them everything’s just kind of grey and monotone.

You know what I’m talking about. Those ruts and grooves you slip into that make everything comfortable and predictable. Those times when nothing really seems to be wrong, but you’re bored and yearning for a little spice. Those moments when you wonder whether your life will keep on coasting along or if you’ll ever end up truly happy.

I worked with a guy in London recently, who came to me because he found life joyless.

He’d done well professionally and was highly regarded by his peers, but having grappled with depression in his past he explained to me that he never really felt like he could be himself, and that he felt disconnected from life.

He’d become a joyless silo, isolated by doing everything that’s expected of him to a high standard, appearing to fit in while not feeling as though he belongs, and seeming to have a good life despite feeling distant from the things that make him feel good about himself and his life.

The walls he’d built around his heart and soul did 2 things. They allowed him to stay in control, keep meeting expectations and keep surviving. And they made sure that who he was ten-thousand feet down inside couldn’t be hurt.

For him, being vulnerable meant losing control, feeling lost and appearing weak, and he had zero confidence in his ability to do anything other than be in control and be strong.

That, he’d learned, was what kept him safe.

But while those walls did a great job of keeping vulnerability out and keeping him “safe”, they also made it impossible to experience joy.

Joy without vulnerability is pretence

Joy is a letting go. It’s a release of expectations and a consent to uncertainty that cannot truly happen without softening into vulnerability right here, right now.

It’s the feeling of being vulnerable – of feeling as though the real you could be hurt, judged or rejected – and the surrounding fear that maybe you’re not good enough after all, that fuels people to become joyless silos.

Those people who appear to experience joy while also staying in control and working to ensure certainty of circumstance are just faking it. They wear a fixed grin, work to gain approval, and project the appearance of ease and joy because that’s their version of fitting in, delivering against expectations and being successful.

They’re just as scared as you and I, but they’d rather maintain the pretence than admit their fear of vulnerability to themselves.

Real joy, can only be experienced while releasing yourself wholly to the moment.

Being vulnerable is as scary as it gets.

It terrifies the crap out of me, and, I suspect, you too.

But having learned what I’ve learned and experienced what life is like without joy, I know which way I’m leaning.

The good news, my friend, is that all my work in natural self-confidence is the very thing that makes it okay to be vulnerable.

Confidence is the foundation for joy.

It’s been an interesting journey, this confidence thing. When I started, I really had no idea how powerful it could be, or where it would lead.

That it’s lead me further and deeper into what it is to be joyful is totally unexpected, and completely fucking wonderful.

And perhaps this is what all of this is really about; learning how to be joyful.