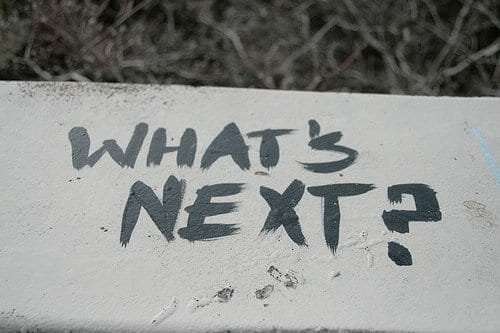 Having been glued to the Olympics, I have a little Olympic withdrawal right now.  But as all I had to do was sit on my butt for a few hours watching world class athletes and competitors doing their thing, I can only imagine how it is for them. What the hell must they be feeling?

Having worked so hard for so long, surely those who won medals would be feel amazing?

Take a moment to watch this fascinating film from the BBC, where Olympic athletes talk about the highs and lows of medal-winning, shining a light on the feelings of loss, emptiness and even depression that can take hold when the euphoria of the medal win passes.

It’s hard not to define yourself by something like that. It’s hard not to form your identity around what you’re doing and to see who you are through the lens of your purpose.

And that’s the problem.

When that goal passes – regardless of whether you achieve it or not – there’s nothing to tie your identity to any more. You’re suddenly lost.

People even define their identity by what they think reaching their goal will bring them. “Once I get there it’ll all be different” is the logic, but as four times Olympic champion Michael Johnson puts it, “It doesn’t mean that all other aspects of your life are now set, and that you’ll never have another problem. It doesn’t work that way.”

This isn’t exclusive to Olympians – it applies to mere humans like you and me.

Whether you define yourself by your work, by a significant relationship or by a purposeful goal, when that thing becomes part of the past your present loses meaning and your identity loses its context.

This is just one reason why I continue to believe that goal-setting is a flawed way to live a life (which is why I created the Gameplan as an alternative), but if you find yourself in the position of getting past the event horizon of a goal, and wondering “What do I do next?”, here are some ideas to get you through that quandary without losing yourself.

Why did the goal you’d pictured matter to you in the first place? What was it about what you were working on that made you want to work on it to begin with?

Hint: Look deep for what’s important about what you decided to do.  The best answer here won’t be about outward success, recognition, approval, validation, etc.  Those things can be pretty cool when they happen, but aren’t great reasons for doing things.

What quality made you set out to do what you did?

Whether you won or lost, you’ve come this far. You’ve achieved several metric fuck-loads of stuff in your life that you don’t give yourself credit for. You’re equipped with a stunning ability to learn and grow. You’re built to move forwards.

Reaching the end of a goal can feel a lot like bereavement, and while it can feel like the end of something significant you have almost unlimited potentiality beyond that.

Genuinely acknowledging your own potentiality can rejuvenate, replenish and refuel like nothing else.

Ask me “What do I do next?” and I might ask you “What do you really want to do?”

2 things about that question.

Firstly, note the word “really”, because for what you do next to feel like it matters or for you to get behind it with everything you’ve got, it has to mean something. It has to resonate with you in some way, right?  Without that, why the hell bother?

Even if you won’t yet admit it to yourself, you know

You don’t exist in a vacuum and neither does what you do. So your choice is really about whether you do something of value or not.

That value is up to you to define and can be aimed at an individual, a family, a group, a community, a system or the world, just recognise that value is the only true currency in the world.

Without value there’s no change, no impact, no meaning, no relevance, no actualisation.

5. Ramp Up The Texture

I’m a firm believer that the quality of your experience counts more than hustling. You can work your ass off for as long as you want, but if you’re miserable doing it then everything will suffer. You most of all.

You don’t have to wait to ramp up the texture of your experience; you can start right now by appreciating the small things. Go and have fun. Laugh yourself silly. Play for the sake of playing.  Surround yourself with awesome people and catch yourself at your best when you’re with them.

While pausing to gather yourself is a valuable thing to do, what’s more important is the decision to pick yourself up and begin.

That might seem almost impossible when you’re feeling deflated, lost, empty, demotivated or depressed on the other side of a goal, but it happens naturally and almost imperceptibly if the driving force is what matters to you.

With meaning as your engine it doesn’t matter if you’re unsure about what to do next, whether you’ve thought it through fully or whether it’s the “right” thing; moving forwards becomes more important than staying still.

After I’d pieced myself back together after my breakdown in 2001 I wondered what the hell I could do next.  And when I felt that The Confidence Guy (a site I’d spent 5 years building) was no longer a good fit, it left me with a big question about what was next.

In both cases, I made a deliberate choice to start

I can’t put it any better than this quotation from musician Seymour Bernstein in his book ‘With Your Own Two Hands’.

“At this low point, we have only to let music itself take charge. For every challenge we can possibly want lies before us in the vast and inexhaustible repertory that cannot but replenish our spirit. For true musicians, depression is temporary because their music is permanent.”

How do you get through a post-goal dip and figure out what’s next?