I’ve been bitch-slapped by life so many times I’d have solid grounds for a restraining order.

Each time my heart’s been broken, my will exhausted and my spirit crushed I’ve had to dig deeper and deeper to find what I needed to carry on.  Each time I picked myself up I got a little bit stronger.  And each time I’ve thought, “Okay, enough now.  Just how fucking strong does life need me to be…?!”

You should know that I’m not a fan of the fluffy stuff.  I don’t believe in God. I think the Law of Attraction has its heart in the right place but has the execution all wrong. Crystals are pretty rocks and angels are awesome, beautiful and powerful – but fictional – creatures.

So it was pretty unexpected when the idea that “Everything happens for a reason” entered my head quite naturally as a valid, reasoned thought, as though everything I’ve been through really was for a purpose.  As if life was taking me somewhere to show me something.  As if there was a grand plan or that destiny really did exist.

Those thoughts had crossed my mind before, but only as a purely intellectual idea.  They never had relevance before.

I deliberately haven’t written about this years World Domination Summit, because I think what’s to be said about it has already been said eloquently by others. It was a different kind of experience for me this year – more subtle, more peaceful – which felt entirely appropriate.

At the end of Andrea Scher‘s session, she gave a card to each person in the room. Each card had an individual, hand-written message. This was mine: 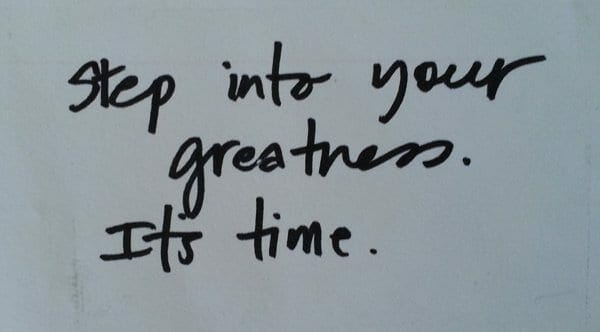 I don’t know exactly what that means and I’m careful about misusing the term “greatness” as it would be easy to stray into self-absorbed asshole territory, but it feels closer than it ever has. And the reason it feels closer is down to everything I’ve learned.

Wouldn’t that be something…